Hotspurs start the defence of the title with a deserved win

Hotspurs start the defence of the title with a deserved win

Victoria Hotspurs, who are the champions of Gozitan football for the last two seasons, scored a goal in each half to earn the first three points of the new championship from their match against Kercem Ajax.  The Hotspurs managed to hold territorial supremacy for long stretches but found it very difficult to create serious scoring opportunities. As a result, the Hotspurs did not manage to put their minds at rest form the full points at stake at an early stage of the encounter.  Kercem tried hard to share play with their more quoted opponents but compromised their possibility to earn a positive result in their opening match of the championship by conceding two goals from two mishaps by the defence. Once again Victoria’s striker Elton Da Silva, who was the top scorer of the Gozitan championship for the last two seasons, was the protagonist of the match by scoring the two goals for his side. 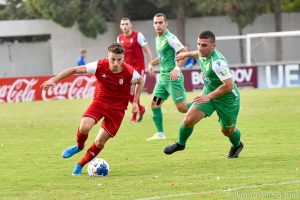